This forum is for Basketball discussion only. Other topics will be moved to the appropriate forum.
Locked Previous topicNext topic
8 posts • Page 1 of 1 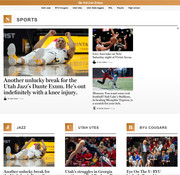 Nothin. Nada. You can stop asking me to pay for a subscription now. I'll just continue to Incognito Mode my way around, you worthless rag. Sheesh.

Yes, there is a story there, but you gotta dive into USU's main to see it.

The amount of energy necessary to refute bull (I can't express myself without swearing) is an order of magnitude greater than to produce it.

I quit so the slfib subscription years ago!

These users thanked the author blueaggie for the post:
GaryTakeTheWheel

I'm not sure where you want it to be, but It's on the very front page, not the sports section, but a link to the story right on the front page of sltrib.com.

Literally the first thing you see at sltrib.com

NVAggie
SJSU Ultimate Loser Award Winner - Given to someone that should probably give up but won't.
Posts: 16346
Joined: November 3rd, 2010, 8:09 am
Location: Where the sagebrush grows!
Has thanked: 743 times
Been thanked: 680 times

We need to get over the small man persecution complex. Nobody is out to get us or ignore us for spite.

Sent from my SM-N960U using Tapatalk

Front page comment this morning, and two great articles with the Aggies the lead story by Kurt Kragthorpe....a former Aggie!

Kurt and his father Dave were both at the tournament in Vegas. Saw them both.